Not long after Apple’s iOS 6 software update was officially released to the public, I earlier wrote some thoughts on ‘Passbook‘; one of my favourite new features in iOS 6 with plenty of potential.

Since then, the number of applications and companies have slowly increased. Just a quick look through AppShopper reveals applications with passbook support added, as well as companies like Qantas and Virgin Australia offering passes via their mobile web checkins (again demonstrating that you don’t need to have an app to support Passbook!) and Ticketek and Moshtix supporting Passbook for events.

The first application to be approved and actively promoted by Apple for having Passbook support was Nova’s ‘ShopperNova’ app – essentially a directory of coupons and other special offers. While the offers here could be added to Passbook, they weren’t taking complete advantage of all the features – using generic barcodes with just a ‘coupon code’ to be used online, or to confuse staff if you dared to try and use it at a brick and mortar location (looking at you Oporto and SuperDry).

After earlier introducing their own MyerOne iPhone app offering to replace your physical card, unfortunately it still uses older 1D barcodes that Passbook doesn’t support, and Myer’s own laser scanners have issues scanning any way…. 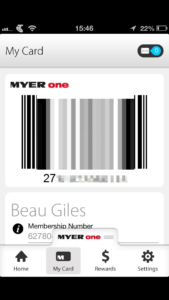 However, launched several days ago; gift cards purchased online and sent digitally now have the option of being added to Passbook!
After setting the recipient details, the preloaded amount and paying, there’s a delay of a few hours for the email to be sent, but then it’s easy to use from there. 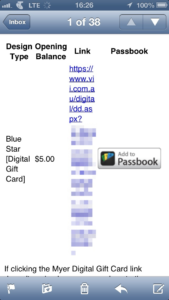 Just tap on the ‘Passbook’ link on your iPhone, or iPod touch (or Mac running Mountain Lion 10.8.2 or later with iCloud), and you can add the card to Passbook! 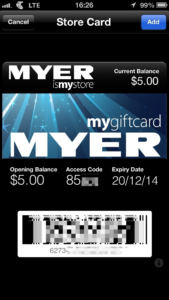 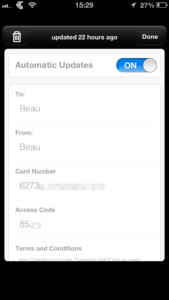 Cards work just like physical cards – barcode will be scanned, and the access code forms your PIN.

Unfortunately the card isn’t location based, so it won’t automatically appear on your lock screen when near a Myer store, but you’ll have to open up Passbook yourself. But it looks like they do support automatic updates for your available balance, etc.

And you can see at a glance in your Passbook how much you’ve got left; 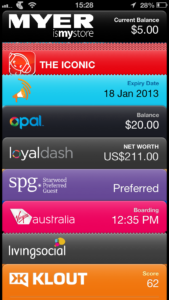