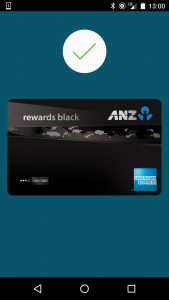 Following on from ANZ’s Apple Pay launch in April, it seems that an Android Pay launch in Australia is now imminent, with ANZ issued American Express cards quietly being accepted when attempting to add a card in Android Pay. Just fire up the Android Pay app, tap add a card, and then either enter in the card verification code for the card already added to your Google Account, scan/take a photo of the card, or manually enter your card details.

While ‘Android Pay’ is not currently available in the Google Play store for Australians, some phones sold in Australia with Marshmallow, and phones flashed with other firmware may already have the Android Pay app installed. And of course, you’re always free to sideload the APK if you’re impatient! (my HTC One M8 is flashed with stock GPE firmware, for those curious among you)

At first I managed to see the ‘ANZ with Android Pay Terms and Conditions’, dated yesterday (10 June 2016), but attempting to get any further resulted in a ‘Something went wrong’ error. 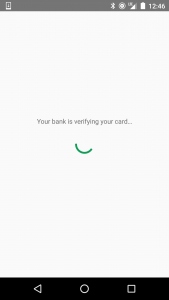 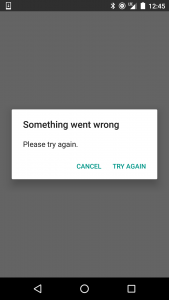 After hitting ‘Cancel’, I was then able to attempt adding my card again, resulting in another set of Terms and Conditions (dated 26 April 2016).
Both Terms and Conditions specifically mention Android Pay, and Android Pay specific functionality (eg, no support for CDCVM meaning that a PIN must always be entered for purchases over $100) Accepting the Terms and Conditions page takes you to a standard verification page – this pulls in your mobile number from your ANZ account to send a verification SMS. Originally a generic American Express card is shown, however this shortly turned into the ‘actual’ representation of the card being used (an ANZ Rewards Black American Express, in this case) 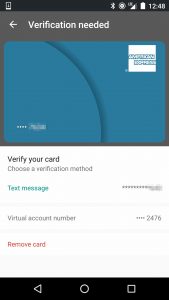 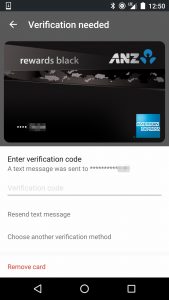 After verifying your card, Android Pay shows a quick ‘how to use’ series of screens – pretty standard stuff, all you need is to look for the standard ‘contactless’ symbol, or ‘Android Pay’ if merchants decide it needs to be promoted. 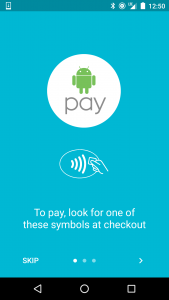 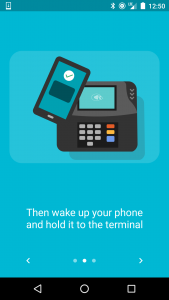 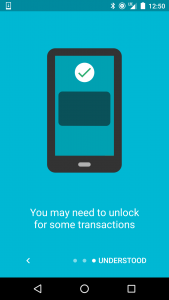 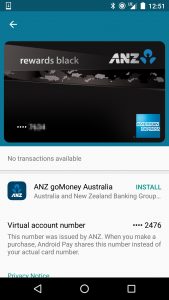 Unlike Apple Pay, your phone merely needs to be awake with the screen on to make a payment, or your phone unlocked using your usual method (whether it be PIN, Passcode, Pattern, or fingerprint). Just unlock your phone and present your phone to the reader and payment will be made with your default card.

You’ll get a confirmation notification, which when tapped will also confirm the ‘virtual’ (or tokenised) card number used for the transaction. 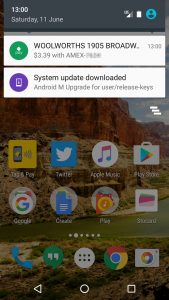 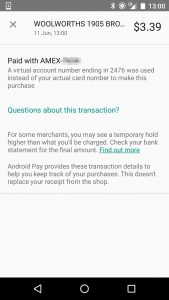 Of course, you can also see a transaction history of all the payments made using your Android Pay device – similar to ANZ’s Apple Pay implementation, you will not see transactions made with other devices or your physical card. 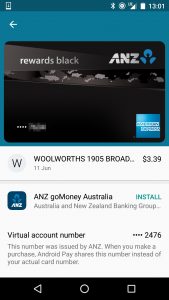 It seems that it is only American Express cards issued by ANZ that are working at this point in time, with the handful of other cards I have handy not working yet.
This includes ANZ Access Visa debit card, an American Express issued Velocity Platinum card, and a Commonwealth Bank Gold Rewards MasterCard/Amex.

It sure looks like Google is on track to launch Android Pay before the end of the month, just meeting their ‘first half of 2016’ deadline.

Update 12/06/2016: The ANZ card was removed from my Android Pay app this morning, and won’t allow to be re-added to Android Pay.

Fingers crossed for a launch next week.