Woolworths Rewards comes to the iPhone with Apple Wallet support

Woolworths have become the first retailer in Australia (and one of the first worldwide, with only Walgreens, Coke and Kohl’s onboard elsewhere) to bring their ‘Woolworths Rewards’ program to Apple Wallet. 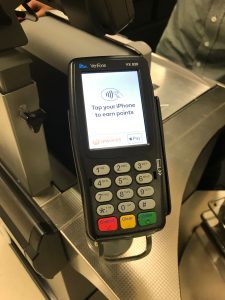 One of the main benefits (and differences) between your Woolworths Rewards card in Apple Wallet, and using other apps such as Stocard, CommBank or even Woolworths’ own apps (be it Woolworths, Woolworths Fuel or Woolworths Money), is that passes in Wallet have the ability to be transmitted over NFC.
Rather than doing the wave with your phone under the barcode reader in the hope that it’ll scan properly, you just need to tap your phone on the eftpos terminal. And even better, it works on the watch too. Plus – no need to unlock your phone or open an app. 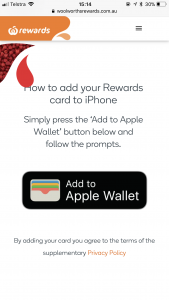 As part of this, you’ll want to ensure you’ve got ‘Automatic Selection’ enabled. This means that when you hold your iPhone to the terminal at Woolworths, your Rewards card will automatically appear and you’ll just need to authenticate to use it – rather than having to open Wallet and find the card. It’s similar on the Apple Watch – rather than double clicking the side button and swiping to your Woolworths Rewards card, it’ll automatically be selected and apply when you hold your watch to the terminal. 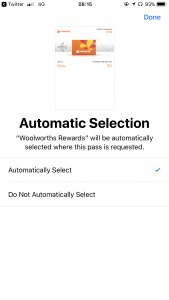 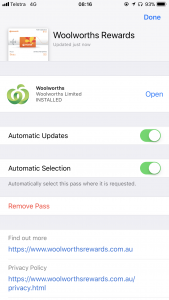 And that’s it! Your pass then lives in Apple Wallet, and your points balance will automatically update within about two hours of using it. It can be used at Woolworths, BWS and Woolworths Metro. It ‘may’ not work at Caltex Woolworths stores, and at this point any fuel discounts won’t apply. (luckily you tap ‘Show Code’ on the pass to get an old school barcode to be scanned if need be). It also won’t work at Big W nor at Dan Murphy’s. 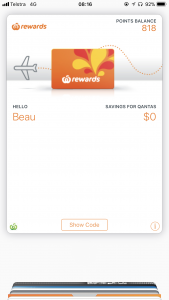 To use Woolworths Rewards at a store, just hold your iPhone (or Apple Watch) to the terminal when it shows ‘Tap iPhone to earn points’, use Touch ID to authenticate, and you’re done. When it’s time to pay, you can also use Apple Pay still – just hold your iPhone to the terminal, your default payment card will be selected, and then use Touch ID to authenticate.

Unfortunately it doesn’t yet transmit both at once (eg, just tap your iPhone once to both pay and apply Woolworths Rewards), presumably due to the way Woolworths Rewards works – with the ability to take $10 off your final shopping basket.

Woolworths Rewards is expected to launch October 16th, and will require an iPhone 6 or later (including the SE), and iOS 9 or later.